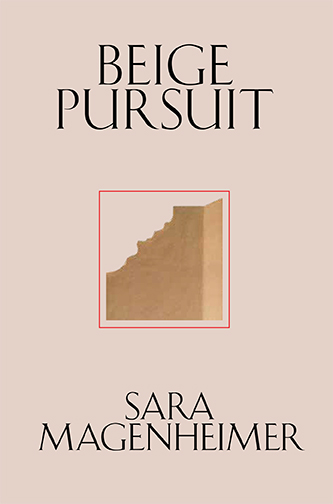 A character called X journeys through a present that is neither here nor there, but feels oddly proximate. She moves through landscapes of words, ever-shifting to host the groundless present, a place and time driven by her motivated, yet contextless pursuit. Narrative is always under construction. The preferred medium for X’s peregrinations: a sentence, as capacious as a three-second video, a ten-year nap, or an unexplored hard drive. In this suspended world, X’s sensorium is curious and alert, but also anguished, hesitant, and precarious: she feels around for sympathetic energies and familiar faces along the way. Along what way? A book like a body might be a room for waiting, a machine for memory, a sensuous thing, an image quickly glimpsed, a performance still ongoing...

You can change your rhythm in order not to panic I learned from Beige Pursuit, a marvel of a book that fuses and transforms various overlapping wildernesses—that of the body subject to transformation, that of the anxiety of our current shared predicaments & the ways that anxiety is fueled to deaden response, & that of the imagination, prone to serious irreverent examination, having to constantly move within its own unfolding in words. X, pregnant, and our guide, is told by talking peonies describing the intimacy gradient that she can’t enter her own home, & so it goes—it being the ordinary blasted bureaucratic temperament of the present. A present Sara Magenheimer illuminates by amplifying and grounding its absurdities in the daily chaotic filters of refusal and admission.
—Anselm Berrigan

Is X pure data? There is mention of her bossy body, but is that body the whole wide world? The cosmos? The singularity? X is a mother, newly, but more pressingly, X is a blinking cursor; the promise of a word. X might be predictive text, but she herself is unpredictable. Is X atmosphere or algorithm? What’s the big diff? Are you my (biological) father, the peonies might ask the mushroom cap, whose answer could be, “Oh.” Rosemarie Waldrop has lunch in the ether with Lewis Carroll then meets Renee Gladman on a shopping mall escalator to dish. I trust this lysergic logic, shimmering through our present din.
—Corrine Fitzpatrick