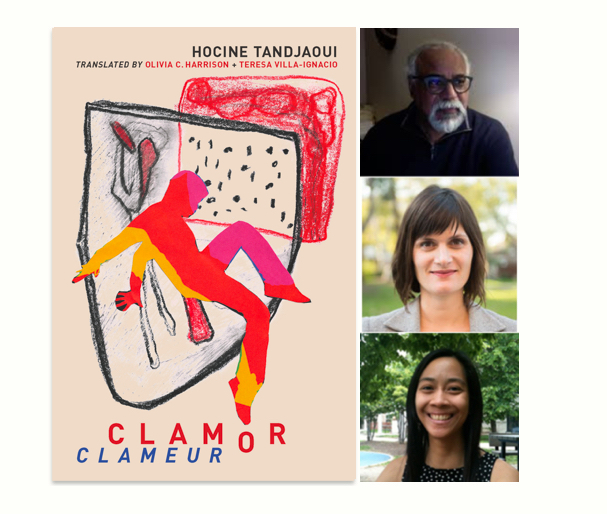 This is an online event and will take place on Zoom, as well as streamed on Youtube.
Free, link to attend.
Closed captions in English available.

Join Litmus Press and Wendy's Subway for a bilingual reading to celebrate the launch of Clamor/Clameur by Hocine Tandjaoui, translated by Olivia C. Harrison, and Teresa Villa-Ignacio.

Clamor is a gripping testimonial to the transnational solidarities forged across the decolonizing world in the 1950s and 60s, from the rarely heard perspective of a child. Set against the backdrop of one of the bloodiest wars of decolonization, Clamor offers an account of the colonial soundscape and a dazzling poetic evocation of Tandjaoui’s discovery of African-American music during his childhood in colonized Algeria. A gorgeously written and translated poetic text or “proème,” Clamor reckons with the music that shaped Tandjaoui’s childhood, the soundtrack of the Black liberation movements in the U.S., and the voices of artists of the African diaspora that rise above the din of war, becoming the soundbox and sounding board of decolonization in Algeria.

Clamor is available to purchase here.

Born in 1949 in Algeria, Hocine Tandjaoui did not go to war, but war came to him, in the singular experience of a country’s transformation from colonial rule to a sovereign nation dominated by dictators. He almost became a teacher, but turned to journalism instead, which led him to the theater. After a tour in France as an actor and theater company manager, he decided to “cross over to the west” and has lived in France since 1972, working in sustainable development and pursuing his passion for reading and writing literature.

Olivia C. Harrison is the author of Transcolonial Maghreb: Imagining Palestine in the Era of Decolonization (Stanford University Press, 2016) and, with Teresa Villa-Ignacio, coeditor of Souffles-Anfas: A Critical Anthology from the Moroccan Journal of Culture and Politics (Stanford University Press, 2016). Her translations include essays and poems by Abdelkebir Khatibi, Jacques Hassoun, Abdellatif Laâbi, and Abraham Serfaty. She teaches at the University of Southern California.

In addition to her work on the Souffles-Anfas anthology, Teresa Villa-Ignacio has contributed translations to ModernArt in the Arab World: Primary Documents (MoMA, 2018) and For an Ineffable Metrics of the Desert, the selected poems of the Moroccan poet Mostafa Nissabouri (Otis Books/Seismicity Editions, 2018). She teaches at Stonehill College, and is completing a monograph entitled Translational Poethics: Postlyric French-American Communities Since World War II.

Litmus Press is dedicated to supporting innovative, cross-genre writing and publishes the work of emerging and established writers, translators, and artists.