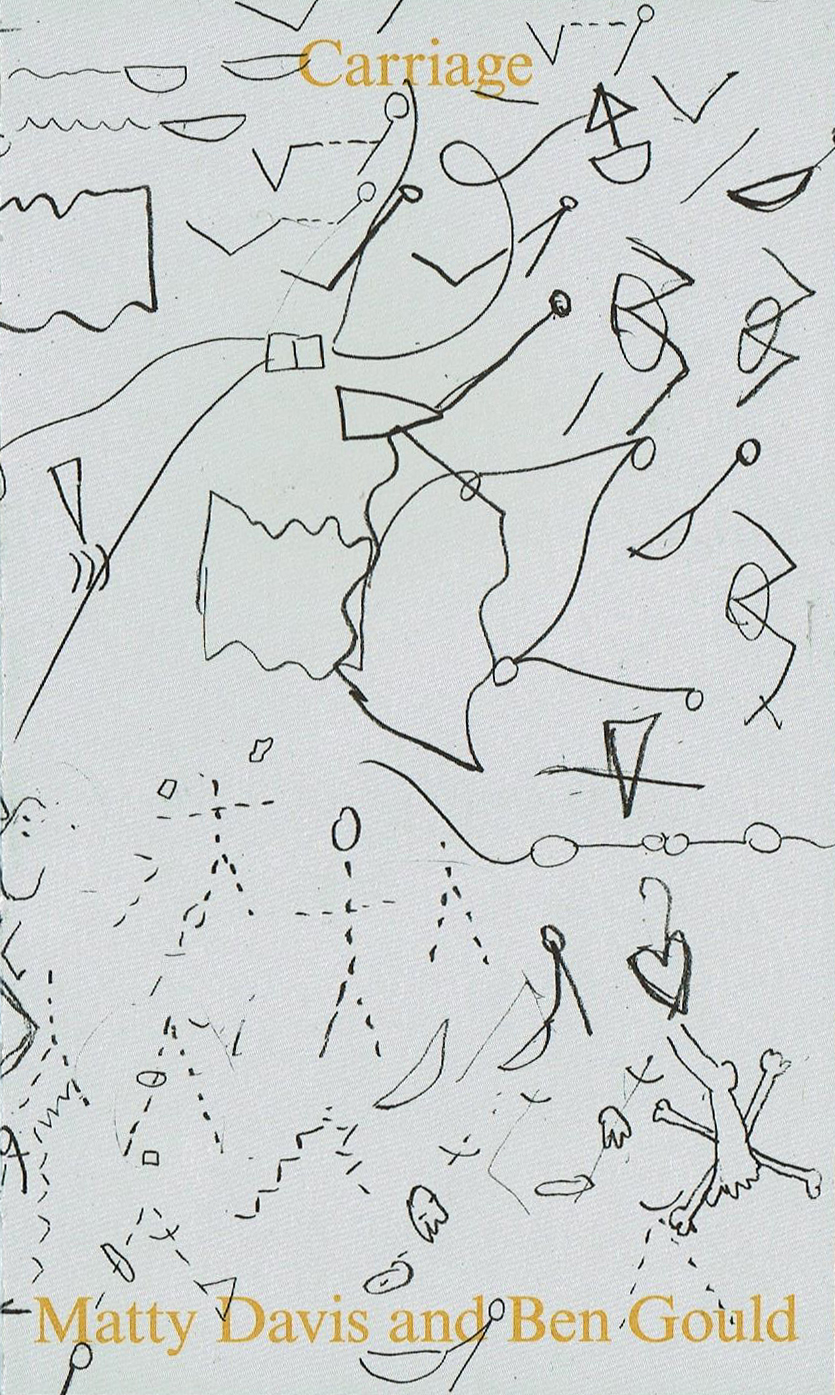 Carriage is a site-responsive performance by Matty Davis and Ben Gould that radically explores control and empathy. Informed by evolving senses of the body, from injury to trauma, healing, and growth, the work draws from the variance of Davis and Gould’s distinct physicalities to develop a shared language of movement. In this language, empathy is a physical tool, resistance offers stability, and a space is created in which everything is leveled, bringing real fear, awakening, and responsibility.

Created in collaboration with designers Ayham Ghraowi and Matt Wolff, this publication includes writing, photographs, and drawings to evoke the urgent physical and interpersonal landscape of Carriage. The artists bear witness to themselves and to each other as they undergo a wide range of physical and emotional dynamics that navigate trust, need, difficulty, and joy. The temporal and spatial experience of Carriage is resituated on the page, as are Davis and Gould's voices, which build off of each other, overlap, and merge as first person singular and plural meet. Their voices are joined by reflections from audience members who attended Carriage in its various locations— aboard a moving vessel on the Chicago River, in a limestone cave network in Kansas City—which offer insight into the viewers’ own bodies and unique physical and psychological spaces.  As these voices combine and accumulate, a broader portrait emerges, not only of a performance, but of the intricacies of human vulnerability, challenge, and care.

Carriage is co-published with the Miller ICA at Carnegie Mellon University in Pittsburgh, PA on the occasion of the exhibition This Skin of Ours, curated by Liz Park (October 12﹣November 17, 2019).

Carriage has been workshopped at Judson Church, the Watermill Center, the Edward F. Albee Foundation, the Philadelphia School, and Queenslab. It was supported through a Space Grant from Queenslab, a residency at Kickstarter’s Headquarters, and was the recipient of a Foundation for Contemporary Arts Emergency Grant. It has been presented by the Palais de Tokyo, Paris; Human Resources, Los Angeles; The Chicago Cultural Center; Creative Growth, Los Angeles; and Queenslab, New York; as well as at a former military battery, in a limestone cave network, and aboard a moving vessel on the Chicago River.

Matty Davis is an artist and choreographer originally from Pittsburgh, where his grandfather worked in the steel mills and his dad’s plane crashed. He grew up as a multi-sport athlete, which exposed him to visceral experiences of surface, injury, resilience, and play that continue to influence his interdisciplinary practice. Often collaborative—with other people, the land, and histories—his work begins with movement, mining and cultivating somatic resources. Empathy, trust, coordination, and energy systems become key improvisational tools for the navigation of unpredictable relationships and undertakings. In constant dialogue, the body marks the world and the world marks it, amidst an ongoing search for transformation and connection. While centered on performances that take place in a wide range of settings—from proscenium theaters to Mt. Whitney, from backyards to the Ouachita National Forest--his work spans dance, sculpture, video, and books. It has been presented by the Art Institute of Chicago, the Palais de Tokyo, the Max Ernst Museum, Printed Matter, Pioneer Works, the Museum of Contemporary Art Chicago, Steppenwolf Theater, and the 92nd St. Y, among others. In 2019, Davis was named 1 of 25 Artists to watch by Dance Magazine. He has enjoyed teaching masterclasses and workshops at various institutions throughout the US, including New York University, the University of Iowa, Virginia Commonwealth University, and Oberlin College. He is currently collaborating with artist Dario Robleto on a series of performances related to the history of recording the human heart.

Ben Gould is an artist currently based in New York City, and born in Grass Valley, California in 1993. After being diagnosed with Tourette Syndrome five years ago, Gould’s studio practice has transformed to harbor a new investment in the body, exploring limits, resistance, and the loss of control. Grounded in performance, his multidisciplinary practice is built upon intimacy, urgency, collaboration, and learning. Gould was raised in the foothills of the Sierra Mountains, in a Gold Rush-era town, between decommissioned mines and a river—this geography has greatly informed his commitment to site-specific projects and reinforced the importance of place in his work. He has performed site-specific works throughout the country, from varied landscapes to institutional spaces – leading to solo gallery exhibitions, performances at museums and cultural centers, and collaborations across disciplines. Gould received his BFA from the Kansas City Art Institute in 2015, apprenticed with master craftsmen in California, and was a 2015 Ox-Bow Fellow. He was an artist-in-residence at Kickstarter’s Headquarters in 2017 and at Queenslab in New York City in 2018. He is a Foundation for Contemporary Arts Emergency Grant recipient, and was a Haystack Open Studio Resident in 2019. Most recently, Gould has performed and exhibited works at Carnegie Mellon’s Miller ICA, Pittsbugh; The Braddock Carnegie Library, PA; Palais de Tokyo, Paris; with Open Spaces Kansas City; the Chicago Cultural Center; Human Resources, Los Angeles; Sala Diaz, San Antonia; Los Angeles Contemporary Archive; and in New York at Queenslab, Judson Church, and the Watermill Center.