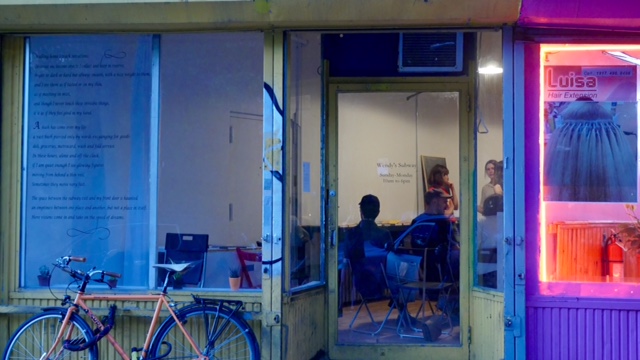 "At the start of 2016, after two years at their second-floor studio on Metropolitan Avenue, non-profit library and writing space Wendy’s Subway moved two stops down the L train to a storefront at 379 Bushwick Avenue. The move wasn’t necessarily by choice— in April DNAinfo reported that other artists who refused to move from the warehouse at the request of landlord Barnett Brickner ended up locked into a costly legal battle, and managing board member Rachel Valinsky told us they were “essentially evicted, as most people in Brooklyn studios end up at some point or another.” But, to borrow from colloquial literary metaphor, every cloud has a silver lining, and they’ve been making the most of their new, smaller space since announcing their first open hours January 31.

Perhaps the biggest programming change is that they’re operating with set hours, from 10 am to 6 pm daily, instead of giving members keys and making the space available 24/7. This may seem like a bum deal for members, but as Valinsky explained, the change allowed them to pilot a residency program with Berlin-based bookstore Motto in the months of February and May. They’ll be moving forward with the residency program on a monthly basis come fall, with different publishers, artists, collections or organizations presenting their printed matter, or any publications and materials that they’re working on and producing there, along with programming associated with their specific mission. Their books or collections will then stay in the Wendy’s library as a permanent installation."

Read more of what Karissa Gall had to say about the new location over at The Bedford and Bowery.